The ordinary. Nothing that anyone would ever conceive of as treacherous. That’s why it’s a humbling and diminishing ordeal to be undone by the ordinary. And for me it’s almost tangible, visceral in ways that I can’t help but be reminded that my ordinary can be a tempest. As I was dramatically and bluntly reminded of recently during what should have been a banal outing to the grocery store. Something that should be simple, an easily accomplished, ordinary errand. But simple can be somewhat less simple than we suppose it should be and the ordinary is never quite as ordinary as it appears. Life altogether is never as simple as we suppose, really. Yet we often presume that the everyday labors that we set for ourselves will always be unhindered, that life is simple and ordinary.

Mental illness can become an existence of the “perhaps” the “maybe” the “I want to, but” it’s a world of the almost ordinary, a feeling of your hand on the knob that just won’t turn, of not getting out of the room because you just cannot bring yourself to open the door. The feeling of being captive inside your own house, sometimes even your own mind is perhaps one of the more deleterious effects of mental illness that I can convey.

I can still remember the day I became untethered from the comforting illusion of the ordinary, when the switch flipped, where I went from someone who was a functional, a respectable (debatable) member of society, a regular attendee at my church, gainfully employed, to someone who broke down crying in Target with two children in tow; overwhelmed, disoriented and at a loss as to why I was even there to begin with. In that moment, on that day my life profoundly and fundamentally changed. I already had a diagnosis, of course and a medication regimen, but that was the day that mental illness became real to me, real in a way that I had only observed or read about. It felt like fire crawling under my skin while the ceiling lifted and my head spun. I had been hospitalized twice before and those experiences didn’t hold the proverbial “candle” to that one incident in Target. Before I had felt somehow different than those “other” patients in the hospitals and I viewed their afflictions with more than a little ambivalence; I was a foreigner and felt slightly confused when confronted with their unhinged lunacy. Because I was just passing through, I didn’t really belong there, I just needed a little mental vacation and then my world would right itself and things would get back to normal; a few pills, a little sleep and I could return to my ordinary life. This though, this mental break, was a whole different type of phenomena. I was the subject now, I was the unhinged, the sedated and generally hysterical person (even if the hysteria only showed on the inside) who just wanted to crawl into a corner and close my eyes.

There And Back Again

Yesterday, at least it was yesterday as I’m writing this, I was cruelly reminded of the deprivation from the ordinary that must often suffice for me. It was like being back at Target that first day when reality, my comfort in the ordinary, shattered.

I was attempting a trip to a local grocery store. My wife wasn’t feeling well and asked if I could go and pick a few things up. And I, having just attended church the previous day for the first time in months, felt that I was up to the task of a small outing for a few necessities. What could go wrong, right? I would be in and out in a few minutes and the task would be accomplished, nothing to it. Things are never as simple as they seem to the imagination though, are they? I had brought with me my seven, almost eight year old son because he simply needed out of the house. So, masks donned, we grabbed a cart and ventured into the store. And with an immediacy so swift I couldn’t have been more than ten steps into the store, I was struggling to recall what it was that I had come to purchase, and of which I never did remember. Within an instant I was confused and scared, all six foot three inches of me was scared in a grocery store; it was and is emasculating. It was just simple, ordinary life that forced me to my knees.

I’ve used that word, ordinary, quite a bit. I think it manifests mental illness in a way that all the psychotherapeutic taxonomies can’t. Because the ordinary, the everyday existential experience that the average person takes for granted, has been weaponized against me and every other person who experiences mental illness as their ordinary.

And this discrepancy between how two aspects of humanity experience the ordinary, the average—for lack of a better term—and those for whom average is an aspiration, finds it’s causation, at least to my understanding, by the fall of humanity through the sin of Adam. I’ve mentioned it before but it bears repeating, what the first Adam broke, I dwell in as broken as it is. The weight of malediction weighs heavy upon those with mental illness.

As the covenant people of God though, we look out into the world with an acute vision and see with comprehension the general brokenness that sin has wrought and continues to rain down upon the peoples and history of God’s creation. We as God’s people recognize that the world is not as it ought to be and needs reconciliation with its Creator. Yet if you take a closer look, the immensity of the destruction that Adam brought will hit you like a closed fist to the face. Because when we look out in a cursory way, we see sin committed, but when we look closer, we see sin experienced through the brokenness of creation that bring things like mental illnesses, mental handicaps, cancer, and other consequences that lack any sort of reasonable moral causation; they simply afflict creatures because the world is fallen and we with it.

And if that was all that there was to it, that man is simply subject to the madness that he is born into, there would be no hope, but our God didn’t leave us hopeless, even when he cast us out and sent us east of Eden, even then he gave the promise of victory over sin, the first promise of redemption in Genesis, “I will put enmity between you and the woman, and between your offspring and her offspring; he shall bruise your head, and you shall bruise his heel.”(3:15) ESV

Another Type Of Ordinary

But there is yet another type of ordinary, the ordinary means of grace, an ordinary that is quite extraordinary, really. On any given Lord’s day you should be able to walk into a Reformed church and if you are of those baptized into the covenant people of God, relying on grace alone through faith alone for your salvation and standing upright among those you call your family by the blood of Christ, receive the means of grace through Word and Sacrament. You should hear the law that brings into stark relief your sins, bringing a contrite and repentant spirit, and the declaration that you have been absolved of your sins by Christ’s life, death, and resurrection. That you have been baptized into his death and raised with him unto newness of life. That the brokenness of the world is not the end, that even those like me, who cannot seem to outrun my affliction with any sense of earthly victory, have a hope that transcends the conditions that I plod through, a hope that transcends the immanent.

What I experienced this past Lord’s Day, after a prolonged absence, entering back into the embrace of my family, was a homecoming. As awkward and uncomfortable as it at times felt to be among so many people at once, it was never an alien feeling to be among them, it was to be home. And I cannot stress this enough, the Lord’s Day is indeed a homecoming, a weekly reunion and meal of a family that is bound together by something stronger than mere genetics or legal status, but by the very blood of the Son of God.

And the benediction drives this home even further. It is a sending out, a blessing upon us as we leave. And where is it that we are exactly heading though? Are we headed home, back out into the real world of school and jobs and brokenness? Or, just maybe, we are departing, leaving home for the week, heading out into a world of school and jobs and brokenness, surviving on the nourishment that we received through Word and Sacrament till we can return home again. This is something that was driven home into my heart this Sabbath as I heard the Word of God and and was fed through the Supper. As I came home again. 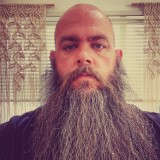 Husband, Father, amateur at everything else...

3 replies on “Three types of ordinary”

Adam, I think this will bring so much hope and encouragement to others, with or without mental illness, because you have expressed so well that in the midst of uncertainty, chaos, fear and trepidation, there IS hope in Christ. I am truly impressed with your firm grip on our Christian faith in the midst of all of your struggles to make sense of the journey you are on. Powerful words… and even in the confusion that beacon of hope burns bright in you. Great piece!

Thank you. Just thank you.

Thank you Adam. What you have shared is profound and that you have found your shelter in Christ gives hope to the rest of us who have our daily struggles that may not compare to yours but still have weight and burden in our lives. I love how you put this:
“And I cannot stress this enough, the Lord’s Day is indeed a homecoming, a weekly reunion and meal of a family that is bound together by something stronger than mere genetics or legal status, but by the very blood of the Son of God.”
Blessings Brother!